Fresno County residents whose homes were destroyed or damaged in the Creek Fire have new housing options available as they return to rebuild what they lost.

They can now live on their properties for the next six months in recreational vehicles or “tiny homes” under a temporary measure approved Tuesday by the board of supervisors. Two of the short term dwelling units are allowed per residential parcel and they must be self-contained with onboard water, power, and waste systems, the county said.

The rule applies to motor homes, travel trailers, truck campers, and camping trailers, according to a county document. A “moveable tiny house” with no more than 430 square feet of living space is also permitted.

According to Cal Fire, it’s the single largest wildfire in state history and has destroyed 856 residential, commercial, and other structures to date. Another 71 structures have been damaged.

The US Forest Service says full containment is not expected until October 31.

Residents who need more time to complete repairs will have the option to continue living in the temporary units after April 6, 2021, the county said. But, starting on that date they will need to connect their RV or tiny home to onsite utilities, comply with some zoning rules and obtain a permit.

FRESNO, CA, Wednesday, October 7, 2020 – The Fresno County Board of Supervisors has adopted a Temporary Housing Ordinance that modifies and suspends various County Zoning Ordinance Regulations to allow for the occupancy of recreational vehicles and tiny homes on properties located within the Creek Fire disaster area that were damaged or destroyed by fire.

In summary, the Ordinance provides for the following:

• Occupancy of up to two self-contained (sewer, water, power) recreational vehicles or movable tiny houses (temporary dwellings) per parcel for a period of up to 180 days (six months), beginning October 6, 2020

• Temporary dwellings proposed to be occupied beyond the initial 180-day (six months) period shall be connected to onsite water, sewer, and power

Additional information regarding the Temporary Housing Ordinance can be found at: 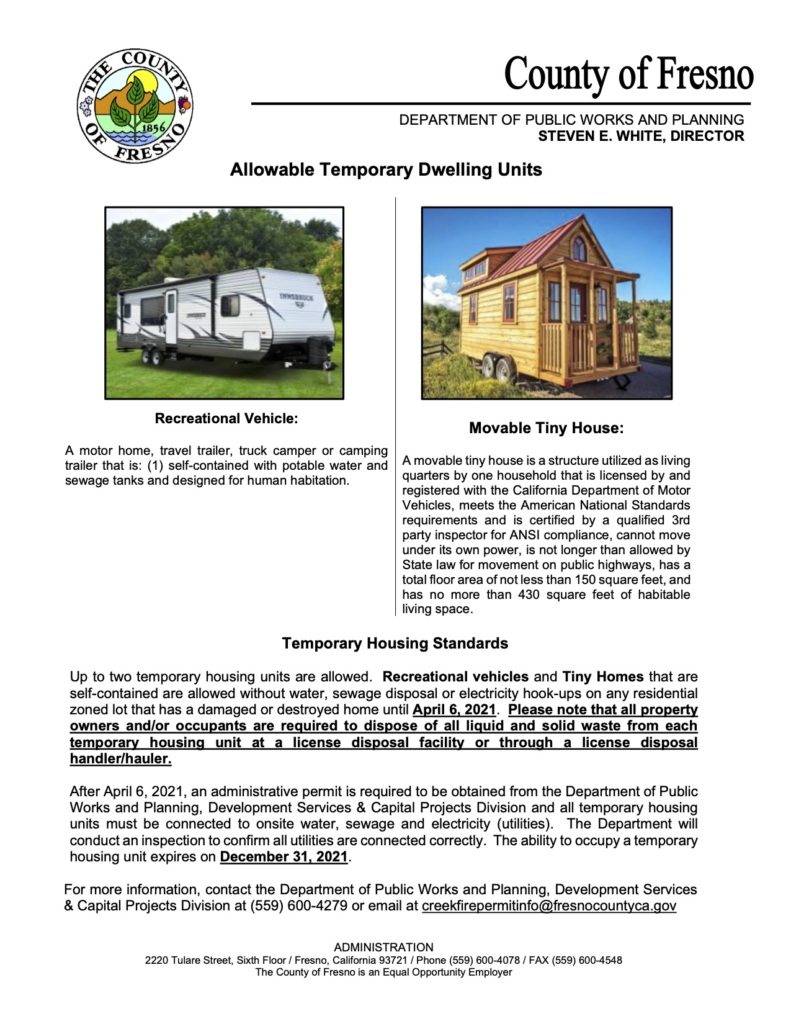